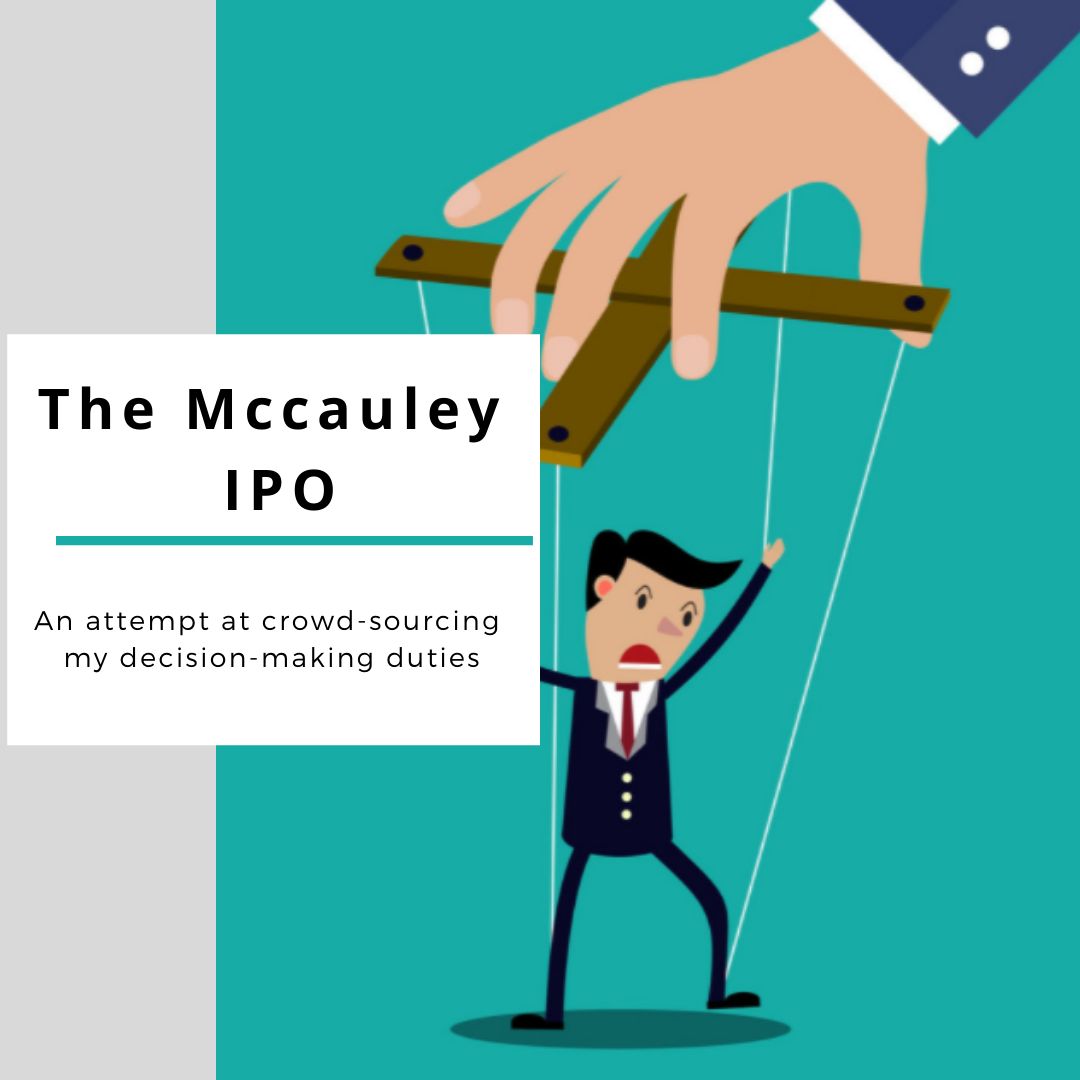 So, I’m pretty set on doing either a 6-month or year-long experiment where I give away (nearly) complete control of my decision-making. This will include everything from small things like diet, workouts, and new hobbies, to more serious choices such as which country we decide to move to after I graduate, which candidates I vote for, and what career I transition to…yes, seriously.

Following is a brief description of why I would do such a thing, followed by specifics of the IPO. Click here to skip the ‘why’ and jump right to specifics.

Why would I do this?

First of all, I think it’s going to be a really fun experiment. Well, maybe not so much for me, but I imagine it will be a lot of fun for those dictating my choices. It will be also be an interesting study in share-holder psychology, and then for myself, an enlightening look at motivation and accountability.

This experiment arose mostly due to the following question, which is something I’ve spent quite a bit of time chewing on as of the last year or so:

Are you the best decision maker you can be?

I’m not sure if I am, especially as I age.  Of course, by nature, the older we get the more stuck in our ways we become. Emerson calls this foolish consistency ”…the hobglobin of the small-minded.’ We stay in careers we’re less than happy in because we assume the risk to start over is too high. We assume certain doors have closed forever. We stop taking on new challenges, and worst of all, we settle.

Each year I’ve done my best to avoid stagnation; to work harder, to be more mindful, and to continue to take on exciting new challenges. But no matter how much I might succeed in exposing myself to new beliefs, mindsets, –shoot, even careers and country of residence– the person behind the wheel at the end of the day is still me, and I know this is in some ways the ultimate limiting factor. We all have our own blinders that hold us back; our own deeply-ingrained habits, thoughts, and fears.  It’s stupidly easy to point these out to others, but nearly impossible to redirect this critical lens inward. Enter the group.

I believe this switch toward communal decision-making is in fact far more rational than it might appear on first glance. I won’t get too in-depth here, but in short, let us consider that the more freedom individual decision-makers are given –both in personal life and the workplace– the more restricted they actually become, and that’s without discussing the reality of there being such a thing as true ‘free choice.’ Sorry if I’m sounding like Kyrie here.  I mention the workplace because I find it fascinating that the traditional bureaucracy (and if you work for a multi-national company, this is likely your experience) is so often carped for turning employees into nothing more than heavily restricted ‘cogs in the system’ and yet, it turns out you and I might actually have more freedom than those working in, say, those new-age normative or neo-normative work environments that so pride themselves upon ping-pong tables, freedom and individuality. For example, companies such as Netflix and Virgin have seen widespread praise for offering unlimited vacation and no set hours, and in theory that sounds fantastic, doesn’t it? But this has resulted in the very opposite occurring: employees refuse to take their vacation time, they work sick, and they work far more (and longer) hours than they otherwise would have.

But imagine getting to drop the suit and tie and wear whatever you wanted to work! Well, when dress codes are eliminated, employees start to dress more similar than ever, for fear of being judged for their attire, ie non-work-related metrics. The truth is –at least in business– self-governance almost always fails. In short, freedom to choose can be stifling.

And ignoring the chaos we’re seeing on the news at the moment, groups are actually pretty dang good at making decisions. In fact, they’re better at guessing games, solving complex problems, and are traditionally more conservative in their choices (This might seem counter-intuitive in this instance, but it should balance out my massive appetite for risk).

Also, in the sake of full transparency, I should mention that I will likely be basing my thesis on this experiment.

On June 25th, 50 shares of ‘McCauley’ will made available. These shares will cost 10 dollars each. Maximum share purchase per individual will be 5 shares.

Those who hold these shares will have voting power, relative to percent of holdings, over the vast majority of the choices I make over the coming year. But what exactly will that consist of? More on that below, but honestly, I’m planning on withholding very little.

The original plan was for this experiment to be free. But the low (or non-existent) barrier to entry left me feeling a bit uneasy. I’m hoping by forcing people to commit, we might have better results than, say, if random or ill-intentioned people got their hands on it. After all, we’ve seen what happens time and time again when, for example, internet-naming contests are discovered by websites like reddit.

I will gladly buy out any shareholder’s shares (via original IPO purchase price) upon their request– after all, that means more votes for me.

The length of this experiment will be 1 year (or maybe 6 months) from date of IPO, which will be sometime in November.

During the time period, unlimited trades and/or sales of shares will be allowed on secondary market at whatever the market price (demand) dictates. I will not have veto power over these choices, but all transactions must be reported to me for documentation’s sake. Drive the price up, trade for favors, tank the stock… you’re free to do whatever you’d like, so feel free to unleash your inner Wolf of Wall Street.

A majority vote of the shareholders will decide the plan of action for each decision I put up for discussion. This vote will be most likely be accomplished via FB polling in a closed group. If you’re aware of a better way to do it, please let me know. Voting would not be mandatory. In case of a tie, a re-vote will occur with the same options.

I will supply all options for each decision, however, write-in submissions will be accepted in certain cases.

Voting is the only control a shareholder has, however, there will be a closed group in which suggestions can made to myself. I have no obligation to respect these suggestions.

What will stakeholders vote on?

Decisions will be presented at minimum 2x a week. Like I said earlier, be I’ll be putting pretty much everything to a vote, from small things like diet, daily workouts, and new hobbies, to more serious choices such as which country we decide to move to after I graduate and what jobs I apply for.

Dividends will be paid out in quarter 4, and will consist of a split of profits that results from any new venture or opportunity the shareholders vote me into undertaking. For example: I used to be a runner. If the shareholders were to collectively decide that I start training and eventually compete again, and I were to make money doing so, a percentage of that purse would be split up and distributed back to shareholders. Same goes for counting cards or anything else that arises.

Why should I buy in?

I honestly don’t know this answer… of course I find the idea fascinating, but I’m not so sure others will feel similar (In fact, I’m quite pessimistic on this). So yeah, I hope it will. But I don’t have a good answer for this.

If this is something you’re interested in participating in, please let me know via the following poll. If the response is large enough I will set up a Facebook group and send out more info once the particulars have been ironed out. Also, if you have any ideas or critiques on this plan, please shoot me a PM on social media.