Okay, I’ll admit it….but only because you kept asking. I quite like the Kings of Leon. Yes, it’s true. Now, are they incredible or ground-breaking or influential? I doubt anyone has ever said said such a thing, but I still enjoy them. Does that lower your opinion of me? I hope not. But I reckon it does. But they’re actually good. Hear me out.

Kings of Leon music comes across a mild, mostly uneventful stew of stadium-soaked angst and nostalgia. Similar to later Mumford or The Killers, they’re perfect for situations where some casual background music might be preferable to active listening. Pretty inoffensive music, sticks to a tight script, know their niche. Your dad will probably dig them. But yes, of course it’s true that hipsters despise them -no, grow physically ill in their music’s presence. But not everything in life needs to strive to innovate, let alone move you. Sometimes you need just need to trade in your Death Grips for some warm, familiar white noise, and that’s exactly what we got in the newest Kings of Leon album, When you See Yourself. It’s basically life’s elevator music. And occasionally, it surprises you with a really nice riff.

Not a whole lot to critique here, right? Well, that’s unless you’re Evan Rytlewski writing on the album in a review for Pitchfork. Now, I don’t normally care much for reading these reviews, particularly those coming from a publication which draws such consistent critique for its frequently off-mark reviews. However, this one was just so shockingly mean-spirited, particularly given the milquetoast nature of the music being reviewed, that I felt it deserved to be touched upon.

END_OF_DOCUMENT_TOKEN_TO_BE_REPLACED

So, I’m pretty set on doing either a 6-month or year-long experiment where I give away (nearly) complete control of my decision-making. This will include everything from small things like diet, workouts, and new hobbies, to more serious choices such as which country we decide to move to after I graduate, which candidates I vote for, and what career I transition to…yes, seriously.

END_OF_DOCUMENT_TOKEN_TO_BE_REPLACED

Thanks to a lab-created virus that has been spread via 5g towers by the American government in a bid to control the people with chips created by Bill Gates–or so my Facebook feed tells me– I’ve found myself working minimal hours in 2020. This gave me plenty of time to catch up on all the movies I’ve missed in recent years. Here were the worst of them.

So there are some ancient immortal people, and mostly they work as military contractors. None of them possess too interesting of hobbies or skills. Charlize Theron is the leader of this group, and she mostly speaks in hammy one-liners. Her secret skill, painstakingly developed over thousands of years, is eating baklava and being able to guess its city of origin. END_OF_DOCUMENT_TOKEN_TO_BE_REPLACED

“If you can fill the unforgiving minute with sixty seconds’ worth of distance run, Yours is the Earth and everything that’s in it, And—which is more—you’ll be a Man, my son!”  -Rudyard Kipling

I used to work with a guy who claimed to have run a mile in 3 minutes. We were at a work function one evening when the conversation turned to athletics, and for the umpteenth time the coworker brought his mile time up. “Is it possible it was a half mile and not a mile?” I asked him, politely. Because 3 minutes for a mile is impossible. His response was to double down.

“Nope, definitely a mile. Listen, I was fast! And that was only in gym class. But the coach hated me so I never joined the team.”

How does one respond to such a lack of critical thought? I admired his self-belief and unwavering confidence. Imagine, though, if it were a degree or work experience he was falsely claiming. Things would of course be different–he’d have to show proof or risk losing his job. I’ll admit a part of me would enjoy witnessing such a thing. Imagine having to attempt a mile at the claimed pace, with the boss and employees track-side watching, job on the the line — a fitting punishment, in my opinion, for violating the runner’s code of honor.

END_OF_DOCUMENT_TOKEN_TO_BE_REPLACED 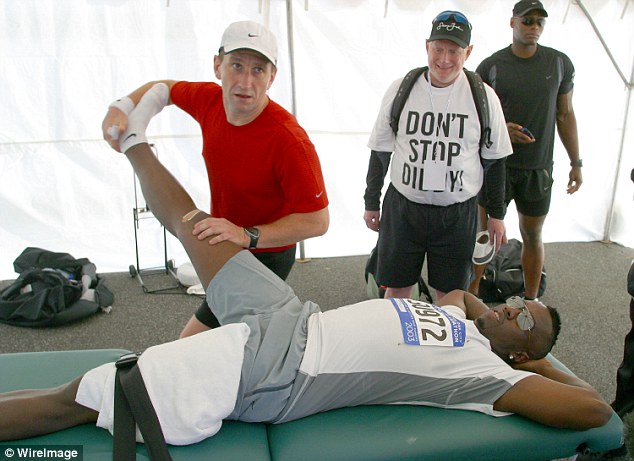 In fall of 2019 news broke that many track and field fans had believed for years to be true: Alberto Salazar, former American record holder and current head coach of the Nike Oregon Project coach– a position in which he oversaw an incredible American resurgence in the distance events, both on the track and on the roads-  had broken doping rules. A 4-year ban was handed out. Alberto Salazar vehemently denied any wrongdoing, but the case was already over- in fact, he’d already had his appeal denied, and the NOP training group was subsequently folded. END_OF_DOCUMENT_TOKEN_TO_BE_REPLACED

This is an excerpt from our soon to be released ‘Out There’ book, which follows a group of individuals who have eschewed the tried and true for something different.

For years Mike Jonesy dreamed of traveling the open the road. However, his dream van -the Toyota Hiace- was admittedly out of his price range. But rather than settle for a cheaper, ubiquitius alternative like an E-series or used sprinter, Jonesy gritted his teeth and spent nearly four months working all the overtime they’d allow at the local coffee shop where he worked as a barista. He told us, “I wanted to stand out, and had I pulled the plug on one of the ‘normal’ vans, I’d likely have spent the rest of my time spent travelling regretting the purchase.”

During those months Jonesy also worked on cultivating his aesthetic, which he stresses is the key to standing out in the increasingly saturated van-life blogging scene. Soon he had a well-manicured beard, was a pro at using retro filters on his iphone, and had discovered a network of like-minded van-dwellers to collaborate with. As a result, he was able to build up a thriving Instagram account (as of today he’s up to 6000 followers). END_OF_DOCUMENT_TOKEN_TO_BE_REPLACED

Three years after I wrote it, the 30 days of burpee article still pulls 90% of this site’s traffic, so I figured I’d revisit it for anyone looking for more reading. A quick summary: that fall I decided to do 90 days of a few minutes of burpees per day (and for the most part, no other strength). In doing so, I increased my bench press by 40 lbs. I also went up a shirt size, saw some nice cardio gains, and got some awesome progress pics.

END_OF_DOCUMENT_TOKEN_TO_BE_REPLACED

Don’t let its 20% rating on Rotten Tomatoes fool you; Adam Sandler’s 2012 ‘That’s My Boy’ is far, far worse than that. Ebert called it mean, Jack Hanlon of Rotten Tomatoes said it was “easily the worst movie of 2012” and now that I think about it, that’s saying quite a bit, given its competitors for that title: Twilight pt 2, Alex Cross, Taken 2, and Savages. And yet, nestled in the closing minutes of this atrocious mess of a movie is a fantastic running scene, the sheer absurdity of which trumps any other movie running scene I can think of off the top of my head.

I’m really excited to hear the championship is leaving North America. I’ve raced in the Arab Emirates a couple times, and those events were some of the most difficult and rewarding experiences I’ve had. END_OF_DOCUMENT_TOKEN_TO_BE_REPLACED

Viewed from above, Barcelona presents a stunning grid of asymmetry. At street-level the city seems far less uniform, with hidden treats to be found for any traveler: ocean access to a warm Mediterranean, successful sports teams, all night clubs, and stunning architecture consisting of Gothic and roman ruins, ultra modern builds, and considerably more chic than one can handle.

Our co-contributor, Darrin, documents his travels around the world. This week he visits the beautiful, cultured city of Barcelona.

By the time we touched down in El Prat on Sunday night I’d already been going hard for 6 hours. The flight attendant must have taken a liking to me, as he had slipped me two plastic shot bottles to go alongside the canned Modelo I had ordered shortly after take-off. Add that to the Jack I had managed to sneak on in my sports drink bottle (my own version of the infamous Tucker Maxx ‘Death Mix’ and I was lit in no time at all. I didn’t remember much of the taxiing or shuttle to the hostel, and while it was only 8pm when they dropped me off, I crashed immediately. Jet lag’s a bitch! END_OF_DOCUMENT_TOKEN_TO_BE_REPLACED